Donate today to help Ryan Zinke as Montana's next Congressman! 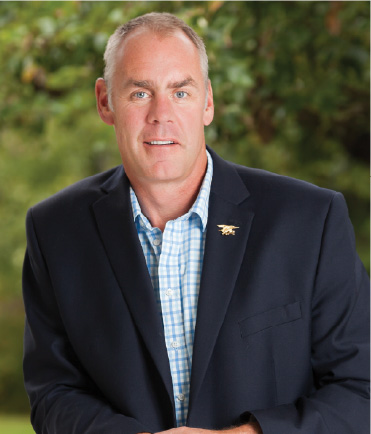 Ryan Zinke is a fifth generation Montanan who has dedicated his life to serving our great nation and state. Ryan is a decorated U.S. Navy SEAL officer who retired after 23 years of military service. After the military, Ryan served two terms as a State Senator, was twice elected as Montana’s Congressman, and served two years as U.S. Secretary of the Interior. Now after a couple quiet years spent with his family, he is signing up again to serve in Congress to help save America from threats we face both foreign and domestic.

Ryan is a Constitutional conservative who believes in the vision our forefathers laid out which protects individual liberties, separates powers between the three branches of government and ensures the rights of our states. His decisions are based on upholding the Constitution and doing what is right for Montana and America. Ryan believes and lives the truth of American Exceptionalism and recognizes the unique role that the United States of America plays in global prosperity and security.

In Congress, Ryan will once again be a champion of the issues most important to Montana:

Ryan’s decisions are based on upholding the Constitution and doing what is right for Montana and America. He believes and lives the truth of American Exceptionalism and recognizes the unique role that we play in global prosperity and security. Ryan knows that the problem is not that there’s too much Montana in D.C.; the problem is that there’s too much D.C. in Montana.

Ryan Zinke on Afghanistan withdrawal: ‘We abandoned our principals’ Biden Wants to Distract Us from His Deadly Mistakes in Afghanistan

Ryan is ready to fight for Montana again but needs your help! Sign up now to volunteer!