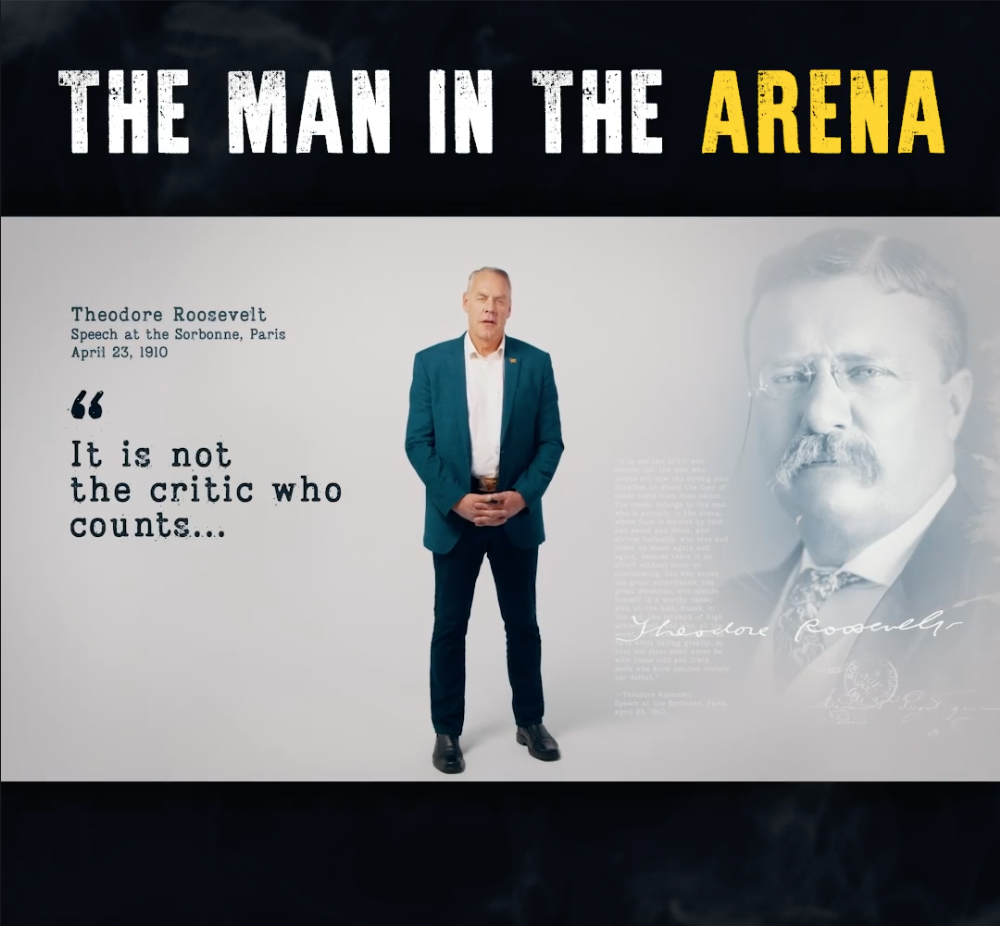 Former Interior Secretary Ryan Zinke is citing former President Theodore Roosevelt in a new ad as he seeks to win the Republican nomination for Montana’s new congressional seat — defending the former president and conservationist just as his statue has been removed from pride of place in New York City.

In the ad, Zinke quotes from Roosevelt’s speech at the Sorbonne, Paris in 1910 — often referred to as the “Man in the Arena” speech.

“It is not the critic who counts; not the man who points out how the strong man stumbles or where the doer of deeds could have done them better,” Roosevelt said in the famous address.

“The credit belongs to the man who is actually in the arena, whose face is marred by dust and sweat and blood, who strives valiantly, who errs, who comes short again and again, because there is no effort without error and shortcoming, but who does actually strive to do the deeds, who knows the great enthusiasms, the great devotions, who spends himself in a worthy cause, who at the best knows in the end the triumph of high achievement, and who at the worst, if he fails, at least fails while daring greatly, so that his place shall never be with those cold and timid souls who neither know victory nor defeat.”

In an interview with Fox News Digital, Zinke said that the former president’s promotion of “Americanism” was relevant to a time when Americans are deeply divided down partisan lines.

“Today, I think today we need another period of Americanism. When the country is so divided, I think we have to rise on the basis of what an American is, both our character and our measures,” he said.

Zinke has touted Roosevelt before when he served as President Donald Trump’s Interior secretary. Roosevelt’s love of public lands and conservation is likely to be a theme that resonates with voters in the district Zinke seeks to represent, where there is a lot of federal land, and hunting, fly-fishing and hiking are all popular pastimes.

The ad also comes just as Roosevelt is at the center of another monument controversy, this time in New York City — where an iconic 1939 bronze statue outside the American Museum of Natural History in Manhattan was removed.

The statue depicted Roosevelt flanked by two figures walking beside him, a Native American man and an African man — but it sparked major controversy and protests from some corners, with certain groups and individuals claiming it glorified colonialism and racism.

The controversy was part of a larger push to remove statues, monuments and other images across America honoring controversial historical figures, Confederate soldiers, slave owners and others.

Zinke warned against a “woke movement” turning key American historical figures — which has broadened to include Founding Fathers like Thomas Jefferson and Benjamin Franklin — into problematic figures. He said that while American history can sometimes be painful, he is against it being erased.

“To me, [the statue] is a part of American history, and I was actively involved as secretary in laying out the plans for the Teddy Roosevelt library, where ultimately the statue was going, but also articulating the legacy of what the president really was, and I am an absolute supporter of ‘history should never be removed.’”

“It’s part of the identity and DNA, and some parts of American history are painful, and other parts are not, but we should learn from our past and form a more perfect union going forward,” he said.

He also said he believes that Roosevelt can be a uniting message for Americans, particularly younger Americans, including on the question of environmental conservation — and can help focus on the uniting factor of being an American, rather than the identity politics of the woke movement and other political offshoots.

“These problems have to be addressed by all of us red, white and blue, and you have to look through the lens of being American, because the division of just being a Republican or a Democrat or black or white or male or female or whatever is distracting us from the really important things we need to do as a nation,” he said. “And those important things are going to take courage and bravery, and it’s going to take someone like Roosevelt or with the spirit of Roosevelt for Americans to rise.”