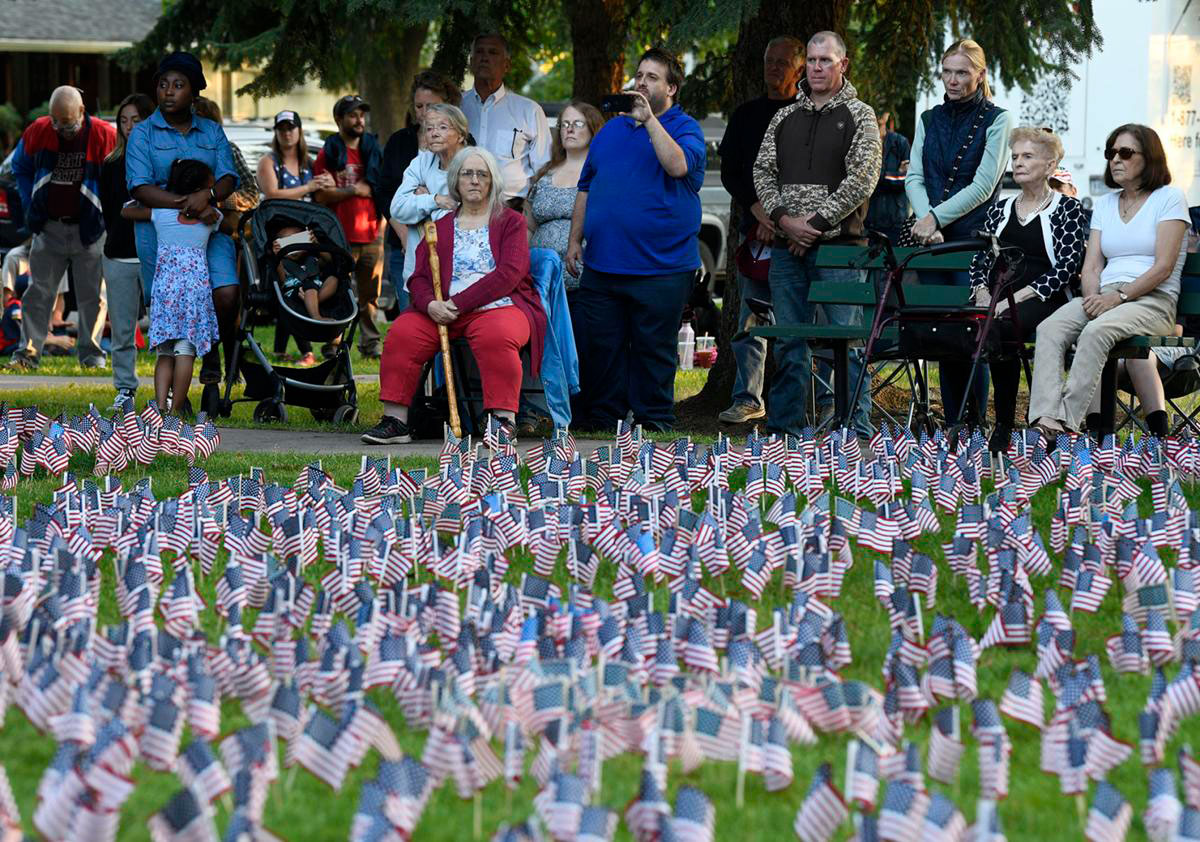 As the sun began to set on Saturday in Missoula, the somber notes of “Taps” floated out over thousands of tiny American flags planted in the ground at Memorial Rose Garden Park to mark the 20th anniversary of 9/11.

Organized by Susan Campbell Reneau, the 19th annual “Never Forget” service drew a crowd of well over 200 people to honor all those who died that day and the sacrifices made by first responders.

Captain Bill Burt, a deputy with the Missoula County Sheriff’s Department, dedicated his remarks to the police officers who died in the attacks.

“The terrorist attacks on September 11 resulted in more law enforcement line-of-duty deaths than any other single incident in our nation’s history,” Burt said.

“Seventy-one officers were killed when the twin towers collapsed,” he added. “Dozens more passed away in the years following 9/11 as a direct result of illnesses contracted while working in hazardous conditions conducting rescues and recoveries.”

Those men and women are “true American heroes,” Burt said.

“Now perhaps more than ever, it’s important we stand together as a community and as a nation to make sure that we never forget the events of 9/11 and the sacrifices so many have made,” Burt said.

Tom Zeigler, a retired Missoula Rural Fire Department firefighter, told the crowd how he had befriended members of a New York City-based fire crew during a training operation in Montana. Many of them later died on 9/11.

Zeigler read their names, noting that he and other firefighters had helped find their bodies amid the wreckage. Some, however, were never found.

Ryan Zinke, a retired Navy Seal commander who is running for Congress, read the names of the 13 U.S. military personnel who were killed in a bombing in Afghanistan in August of this year. After listening to President Biden speak this afternoon, I want to be very clear about a few things.

Americans overwhelmingly agreed that it was time to end the war in Afghanistan. Despite the White House’s best efforts to make the media and American people believe President Biden was dutifully fulfilling his promise, the reality could not be further from the truth. It was President Biden and his entire administration who shamefully abandoned U.S. citizens, abandoned our allies, and abandoned our core principles that as a nation we will “support any friend and oppose any foe to assure the survival and success of liberty.”

The criticism is not whether the United States should have ended the war, it is how the U.S. failed in ending it. The White House is trying to distract you.

The failures are many:

President Biden is responsible for the decision to give away Bagram air base that forced us to operate out of Hamid Karzai International Airport, where our military forces were surrounded, outnumbered, and out gunned by our own American-made equipment.

President Biden is responsible for the decision to retreat on a Taliban imposed timeline and trust the benevolence of the Taliban to give free passage to the airport. In doing so, he abandoned U.S. citizens and tens of thousands of the same allies that fought and sacrificed alongside us.

President Biden is responsible for the conditions that allowed a radical Islamic ISIS-K terrorist attack that killed 13 of our troops and wounded many more. An attack on a virtually un-defendable position was both predictable and preventable. “President Biden’s ineptitude has enabled the Taliban the capacity to shut down the small Kabul airport and hold hostage or slaughter every troop and citizen,” said Zinke.

The former Navy SEAL said he has long favored withdrawal from Afghanistan, but not the way it was done by the Biden administration.

The former Republican Montana congressman, who is now running for a yet-to-be-created new congressional seat in his home state, said his deepest concern for those Americans currently left behind in Afghanistan is that anyone who is sheltering in place is just waiting to be killed.

Montana lost a congressional seat decades ago, leaving the state represented by one member in Congress for over 30 years; partisans on both sides of the aisle once despaired that the state would ever regain the second one. But that all changed when the latest data from the U.S. Census Bureau from the 2020 count showed a nearly 10% increase in population. This gave Montana the 434th seat in the coming Congress.

As I write this article, wildfires have once again covered much of Montana in a thick layer of unhealthy smoke. There are 25 active fires burning 250,000 acres from Hardin to Troy. Even if you don’t see the flames, the smoke and poor visibility is hard to ignore. Yet, ignoring the issue and letting politics get in the way of action is exactly the problem in Washington, DC.

Last year, fires across the west burned a record 10+ million acres and nearly 18,000 structures. The cost to taxpayers was in the billions and the loss of life and habitat tragic. Unfortunately, we are on track to surpass that grim marker in 2021. The Forest Service estimates a backlog of 80 million acres of unhealthy forest in need of restoration and 63 million acres have a dangerously high fire risk. When Department of Interior lands are added to the mix, the scale of forest mismanagement from years of neglect is staggering.

There is little doubt that the fire season is longer and drought conditions and elevated temperatures have created a perfect storm. Everyone should agree that the federal government can – and must – do more to restore the health of our forests to be more resilient against catastrophic wildfires, regardless of where they fall on the issue of climate change. For climate change advocates, the amount of CO2 released into the atmosphere by fires cannot be ignored. Dryer and hotter conditions should encourage active management rather than offer an excuse for the destruction of habitat and waste of renewable resources. The good news is, there are common sense solutions that can be quickly enacted if Congress had the resolve and leadership to get it done.

Yes, under the previous administration, Republicans and Democrats came together to pass the “wildfire funding fix” which treated wildfires like other natural disasters, allocated more money for suppression, and provided more resources toward wildfire fighting and response. Addressing the cost of fighting fires was helpful, but the real solution is using best science and better management to help prevent wildfires in the first place. In a Tweet before July 4th, the White House proudly announced some supposedly exciting news: “The cost of a 4th of July Cookout in 2021 is Down $0.16 from Last Year.” Sixteen whole cents. They claim reduced costs for vanilla ice cream, potato chips, and a can of beans. While it’s wonderful that President Biden gave the American people his permission to gather with their friends and family for backyard barbecues, I am still struck by just how out of touch that “announcement” was.

We are facing historic inflation and the rate of consumer prices increases have hit a 13-year high. Costs of everything from building supplies and energy to groceries and home products have gone up since last year – and not just by a little. Under President Biden, Montanans are paying more:

Expert economists expect the inflation to continue and get even higher. And to make matters worse, they warn that more government spending and stimulus that is being promised by the Democrats in Washington will prolong the crisis.

Even CNN had to admit that things are looking rough for the average American, posting an article online with the title “Every aspect of American life is getting more expensive.” One of the major culprits behind rising prices is the Biden-Pelosi economic agenda of spend, spend, spend, and regulate the private sector into oblivion.

With trillions of dollars of spending already rubberstamped by Washington this year, and trillions more in the works, the Biden-Pelosi administration is leading us into an economic storm. Just last week, they announced a new, partisan $3.5 trillion budget plan that would accompany a $1.2 trillion infrastructure bill. That’s almost $5 trillion with no actual plan to pay for it. 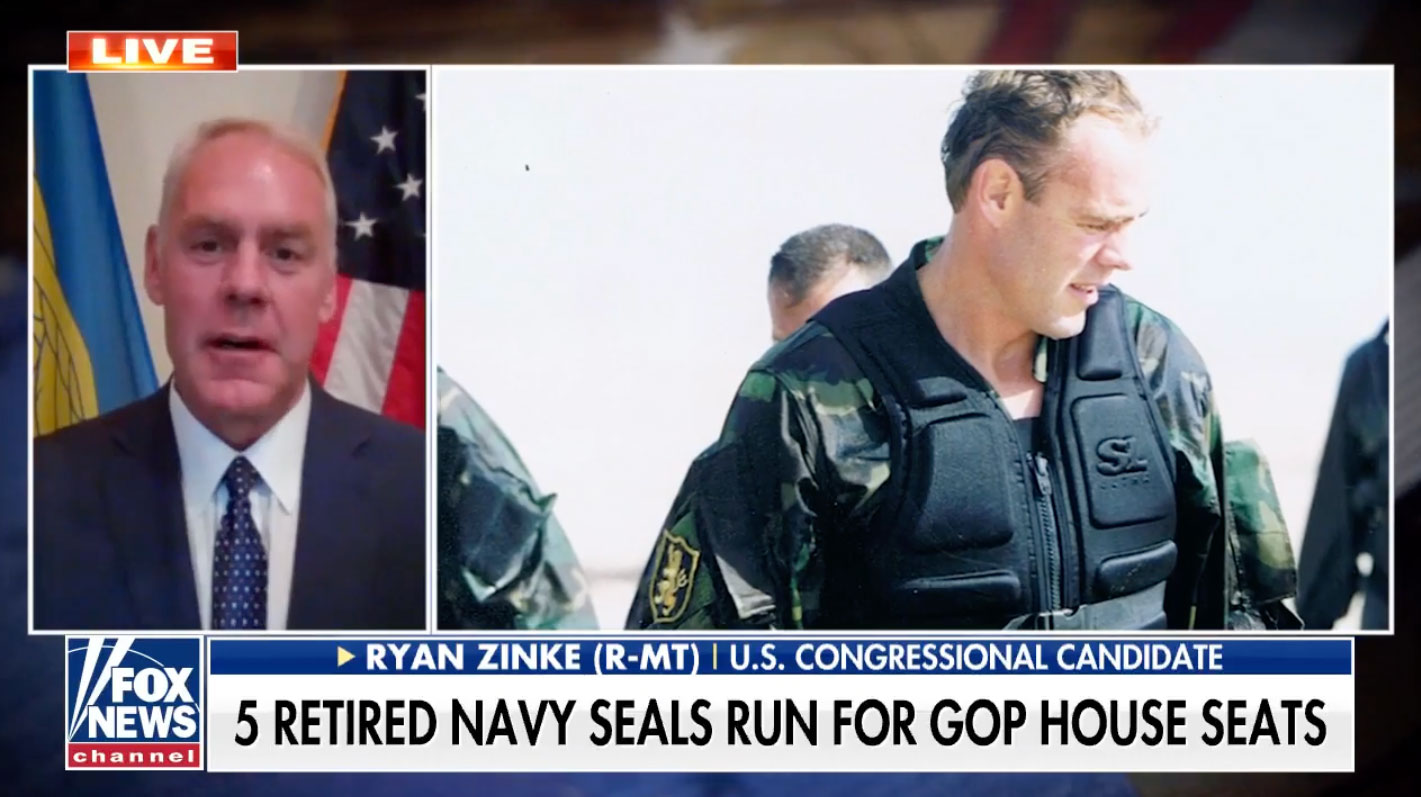 Five retired Navy SEALS are running for Republican seats in the House of Representatives in a collective effort to get more veterans in Congress.

Ryan Zinke, the former interior secretary, plans to address the division in America.

“A lot of my friends say, ‘look, the U.S. is falling apart. It can’t be fixed.’ It certainly can be fixed,” he said. “There’s no one better in crisis than SEALs Special Forces. We’re going to win, and we’re going to save America.” Washington’s greatest hope for political bipartisanship and action may be in the hands of the nation’s most lethal outfit — U.S. Navy SEALs.

In a show of political force never before seen, five retired SEALs are running for House seats in 2022, hoping to join Texas Rep. Dan Crenshaw, who is expected to win a third term.

“We all believe Congress is a place where you can make a sizable impact, and I think that’s why a lot of us are trying to get there,” said first-time Republican candidate Eli Crane of Arizona, a winner on the Shark Tank investor TV show.

“I personally believe that Americans, and that includes people on the Left, are really looking for a group that they understand that they can intuitively trust to do something better,” said Derrick Van Orden, who nearly won in 2000 and who is again challenging Wisconsin Democratic Rep. Ron Kind in 2022.

The “old man” of the group, former Interior Secretary Ryan Zinke, a former Montana House member running to return to Congress, said that while they are all Republican Party faithful, the SEALs “caucus” could have an outsize impact on bridging the political gap in Washington.

“I’m gonna win,” said Zinke, already endorsed by former President Donald Trump. “But I guess I’m reluctant because I know what D.C. has become. It is fixable. If I didn’t think it was fixable, I wouldn’t do it. We got to learn to work together as a nation. I don’t think the biggest threats are Russia, China, or even Iran. I think it’s the division within this country,” he said from Kalispell, Montana. Former President Donald Trump has endorsed Ryan Zinke for Montana’s new congressional seat. The former president sent out a press release, saying that he was an instrumental part of this administration and has his complete and total endorsement for congress.

Zinke tweeted, saying he was honored to have the “complete and total endorsement” of Trump.