This week, Ryan Zinke announced his first legislation: the Federal Employee Accountability and Reduction Act, a ten point plan to confront the entrenched bureaucracy of the DC swamp.

Ryan Zinke knows firsthand how powerful the DC Swamp can be. As Interior Secretary, Ryan Zinke was able to relocate parts of BLM out of DC and back to the areas that they actually manage. He proposed a budget which would cut wasteful spending and eliminate 4,000 federal employees from the Department of the Interior. Washington DC needs accountability and Ryan Zinke has the plan to bring it to them.

The ten point plan is as follows:

“I also know for a fact that the federal government is too big and unelected bureaucrats are too powerful. As a whole Washington, DC, is concerned with one thing above all else, how to keep its pet projects and special interest funding going. No more. This legislation would force the government to downsize via attrition and would defund and repeal recent expansions of the IRS, DOJ and other agencies.” – Ryan Zinke

Follow this link to read more about the FEAR Act

In Bozeman Ryan Zinke was joined by candidate for Senate District 34 Shelley Vance at the Bozeman Stampede. They had the chance to talk with voters and experience the opening night of one of Montana’s best celebrations of cowboy culture. In Butte, Ryan had the pleasure of speaking with Montana Women in Mining and the Montana Society of Mining Engineers to speak about balancing conservation and resource extraction and the massive role that American mining plays in making sure we have access to the critical minerals we rely on. 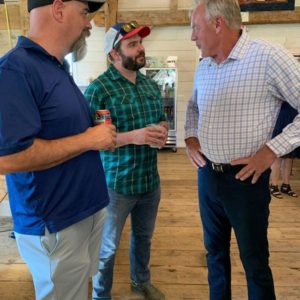 In Columbia Falls, Tom, Carol, Joel and JoAnn hosted a great neighborhood meet & greet. More and more Montanans are ready to take back the House and fire Nancy Pelosi! Register for the rallies at www.RyanZinke.com/Freedom

Calling all Volunteers! We Need You to Keep Montana Red!

Team Zinke is out knocking doors, making calls, and putting up signs! But we need your help to make sure we keep Montana red and take America back from the Democrats! If you would like to volunteer follow this link, reply to this email, or come visit one of the GOP field offices listed below!